A Leader in Unmanned Systems

Virginia’s R&D assets, top-ranked education system, varied geography for testing, and proximity to Washington, D.C. and major defense contractors set the foundation for success in Virginia for companies in the unmanned systems industry. 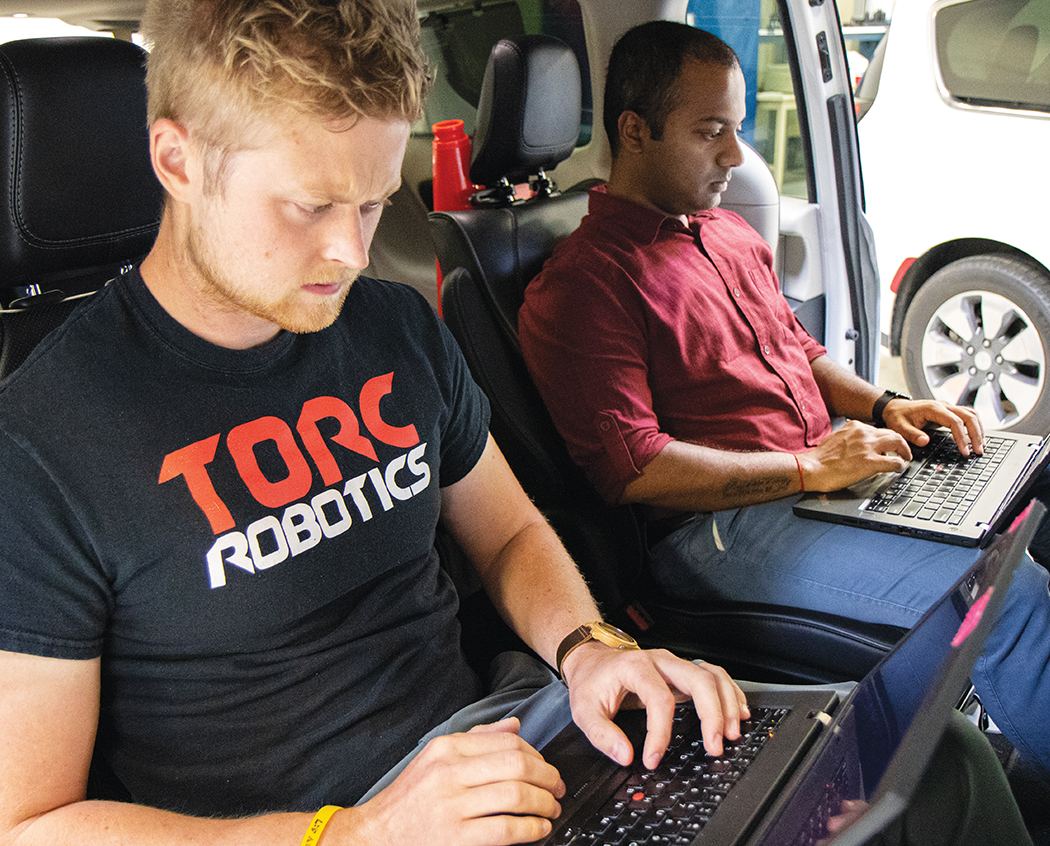 Virginia is already home to a collection of assets that are attractive to companies operating in the rapidly evolving unmanned systems industry. Virginia houses an FAA-designated test range, varied testing environments, including a Beyond-Visual-Line-of-Sight corridor, and university and federal centers engaged in cutting-edge industry R&D. 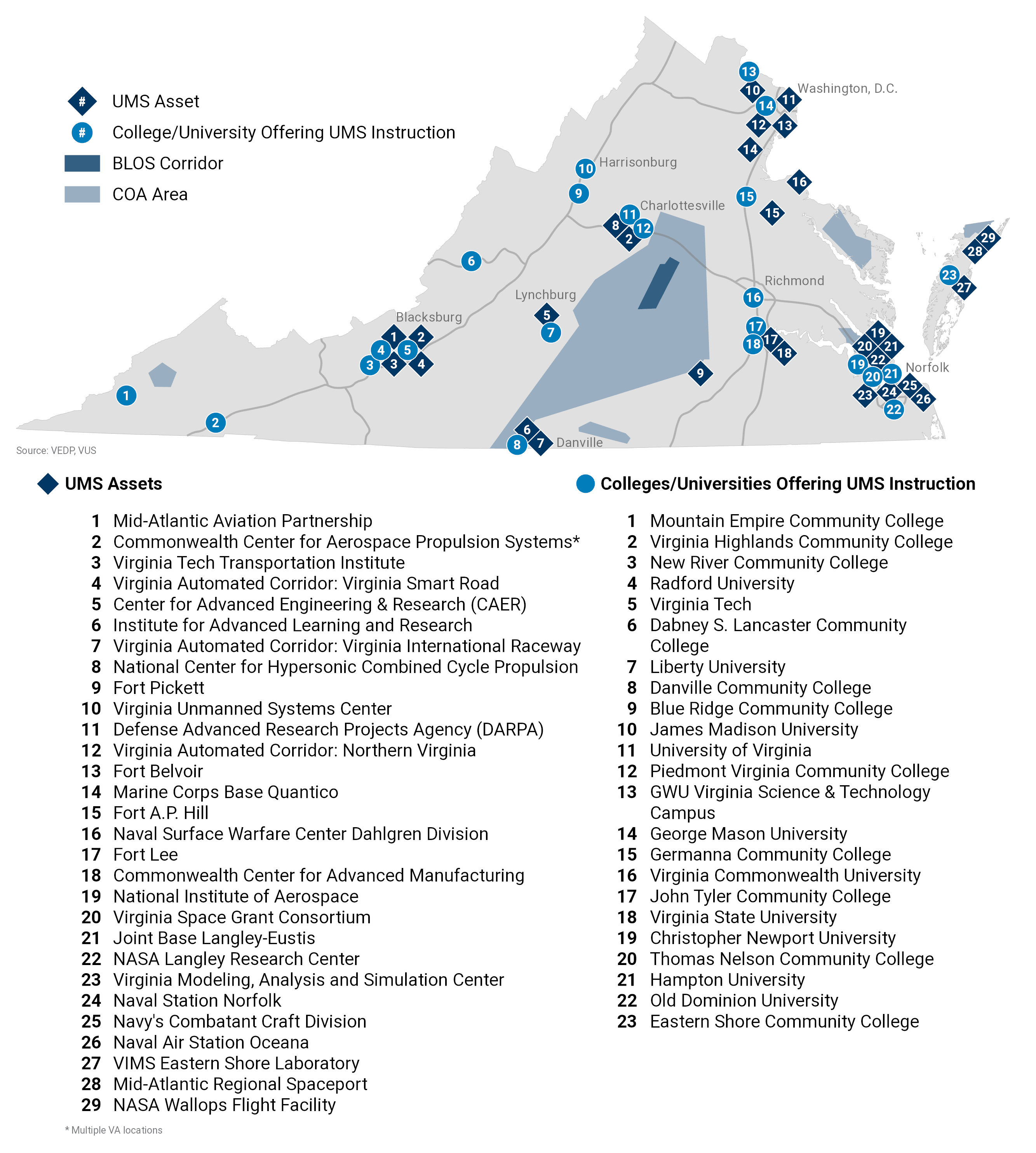 Housed at Virginia Tech, MAAP is an FAA-designated test site for unmanned aircraft systems. MAAP focuses on foundational technologies and high-value operations that will enable the efficient use of unmanned aircraft for a broad range of applications. Key areas of focus include:

Virginia Tech is also home to the Virginia Tech Drone Park, where students, researchers, faculty, staff, or university affiliates can safely operate UAS without the constraints of registrations, certifications, or specialized training. The Drone Park is one of the tallest netted facilities of its kind and features nearly 3 million cubic feet of flight space.

NASA Langley is focused on the safe incorporation of drones into the airspace and has conducted testing to assess how well autonomous craft avoid structures, each other, and other hazards at low altitudes. Testing is being performed on a small flight range on Langley’s property, not far from CERTAIN - City Environment for Range Testing of Autonomous Integrated Navigation - which mimics an urban environment where drones can be monitored while safely flying between buildings and over streets with pedestrian and vehicle traffic.

NASA Langley also houses the Autonomy Incubator — a group of multi-disciplinary scientists, engineers, and student interns that study and research autonomy skills that will contribute expertise across NASA missions and other applications where autonomous systems can be applied.

Virginia is one of nine participants in the FAA’s BEYOND program, which continues the work of the highly successful UAS Integration Pilot Program (IPP) by focusing on enabling routine, scalable operations beyond visual line of sight. Virginia’s BEYOND team is advancing UAS applications for infrastructure inspection, insurance damage assessment, and package delivery. Day-to-day operations of the program in Virginia will be managed by the Virginia Tech Mid-Atlantic Aviation Partnership (MAAP). Corporate partners include: 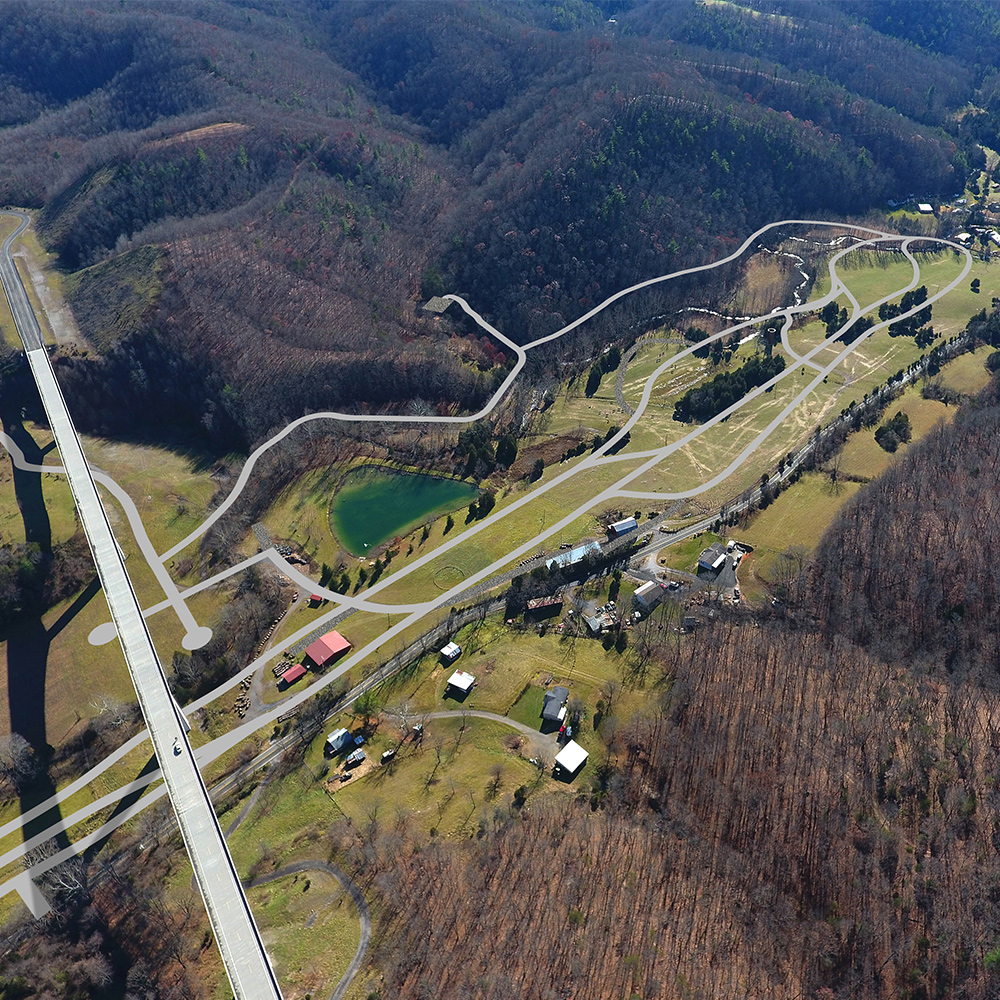 Virginia is home to a number of companies at the forefront of self-driving technology. Advanced driverless technologies are being developed at companies like Torc Robotics (Blacksburg) and Perrone Robotics (Crozet) and are part of the advanced unmanned ecosystem in Virginia today.

The Virginia Tech Transportation Institute (VTTI) is the 2nd-largest university-level transportation institute in the U.S. and operates the Virginia Automated Corridors (VAC) Initiative in partnership with the Virginia Department of Transportation, the Department of Motor Vehicles, Transurban, and HERE Technologies, a leader in automotive mapping technology. The VAC offers automated vehicle developers the opportunity to test their technologies on Virginia roads covering more than 70 miles of interstates and arterials in Northern Virginia, including Interstates 66, 495, and 95, as well as state routes 29 and 50. The corridors also include two test-track environments - the Virginia Smart Road, located on-site at the Transportation Institute, and the Virginia International Raceway in Southern Virginia.

There’s probably more real-world commercial-level activity happening here in Virginia than anywhere in the country. It’s a testament to the positive business climate, technical capability, and support from multiple administrations. 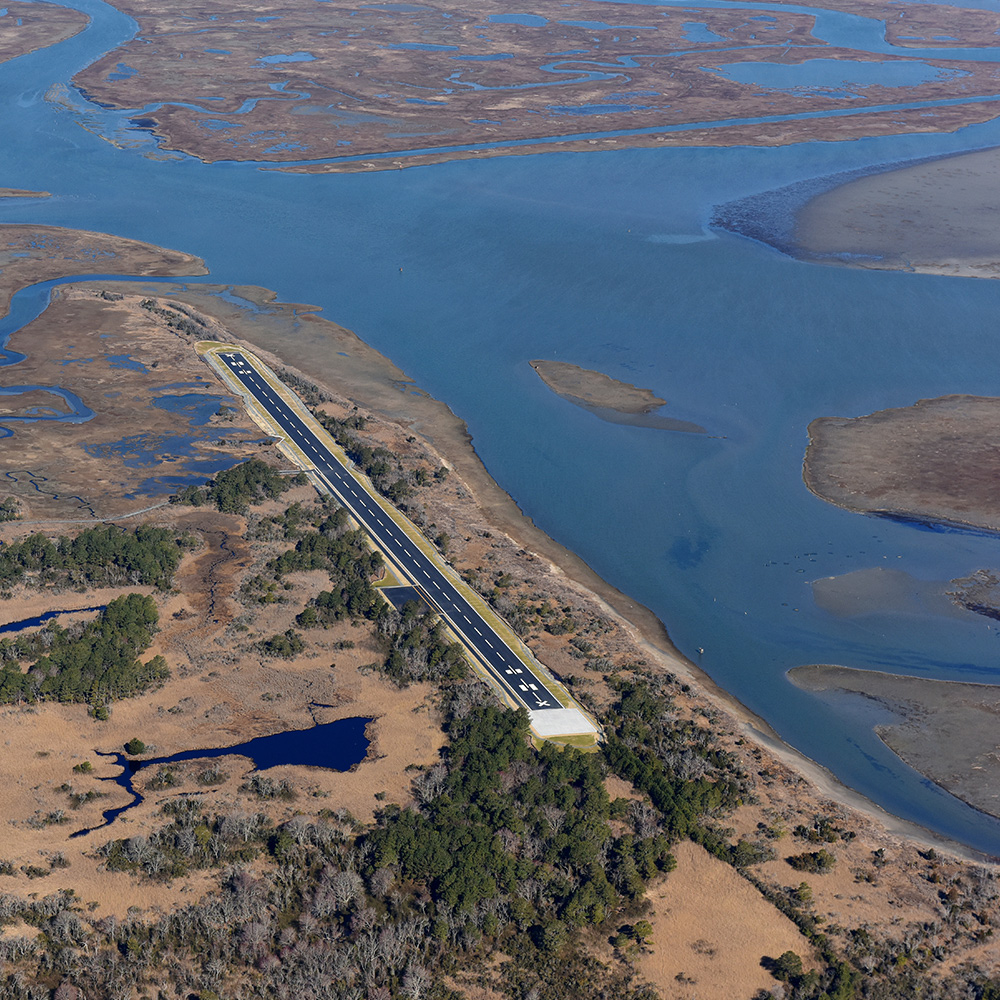 Virginia’s geographic position on the East Coast provides access to a wide variety of waters for testing – from marshes and shallow rivers to the Chesapeake Bay and the Atlantic Ocean. An advanced maritime, naval, and shipbuilding environment in eastern Virginia and Hampton Roads provides a deep base of knowledge in water-based industries not seen in many locations.

One example is the Navy’s Combatant Craft Division (CCD) based in Little Creek, Virginia, which is the DoD's Center for Excellence for manned and unmanned boats and combatant craft total systems engineering. Additional resources can be found in maritime testing at Wallops Island.

Virginia Tech’s Deep-X Team is a finalist in the Shell Ocean Discovery XPRIZE Competition, which challenges teams to develop technology for mapping the ocean faster and with more autonomy than is possible with today’s systems.

Home to the 2nd-highest concentration of technology workers in the country (CyberStates, 2019) and over 24,000 doctoral scientists and engineers, in Virginia a company will find a skilled workforce ready for the jobs being created in emerging technology industries. In addition to traditional engineering programs found at Virginia’s universities, a number of university programs in Virginia offer a specialization in unmanned systems.

ODU’s Frank Batten College of Engineering and Technology houses the Unmanned and Autonomous Vehicle Laboratory that was created in fall 2015 to support ongoing work in ground and flight-based unmanned and autonomous vehicle design.

At the Virginia Modeling Analysis & Simulation Center, a research focus is virtual environments and robotics and has included work with the Naval Surface Warfare Center to partner in the Navy's unmanned surface vehicle (USV) research.

At the community college level, a number of colleges offer UMS programs:

We started what is now the largest drone technology services company in the United States … and we celebrate further expansion and the opening of the world’s first and most advanced specialized drone pilot training facility. And we’ve done it all right here in Virginia.

With the passage of HB 2016 and SB 1207 in 2017, Virginia became the first state to allow unmanned personal delivery devices — like this Starship robot at George Mason University in Fairfax County — to operate statewide on sidewalks, shared-use paths, and crosswalks.

Wing debuted its U.S. drone delivery trials in Christiansburg in 2019.

Consistently ranked as one of the top states for business, Virginia offers an environment where promising technologies and the companies that support them will find success. 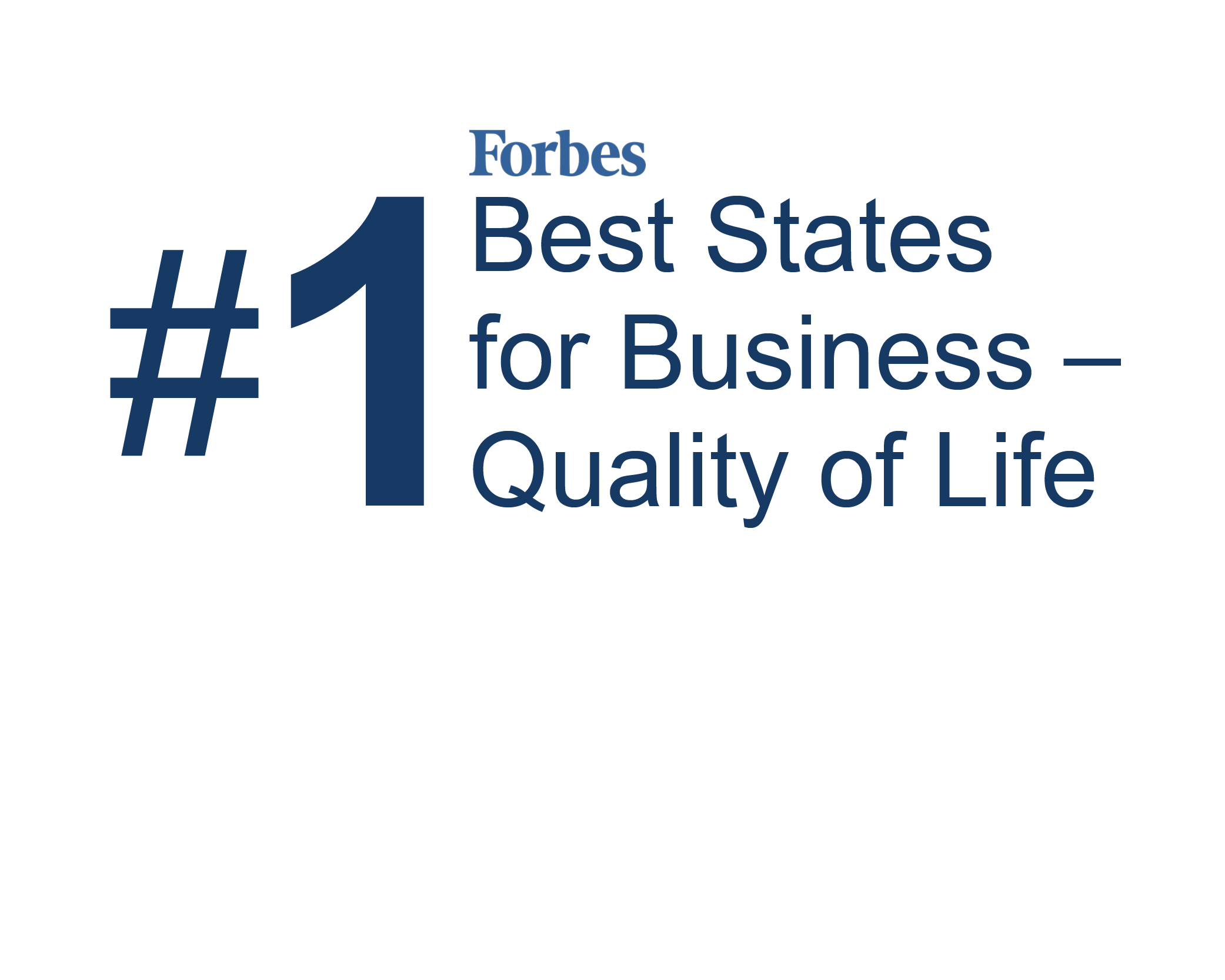 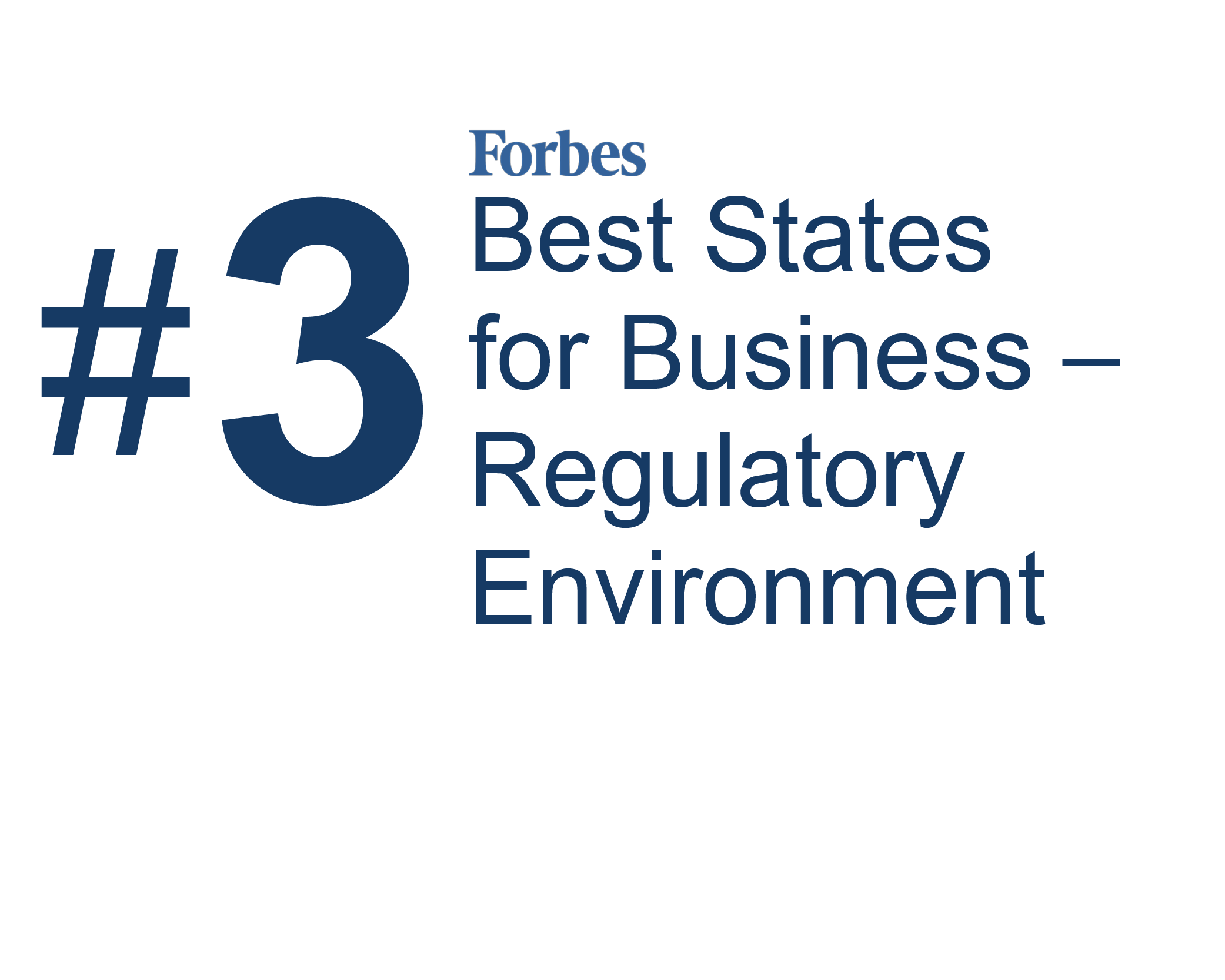 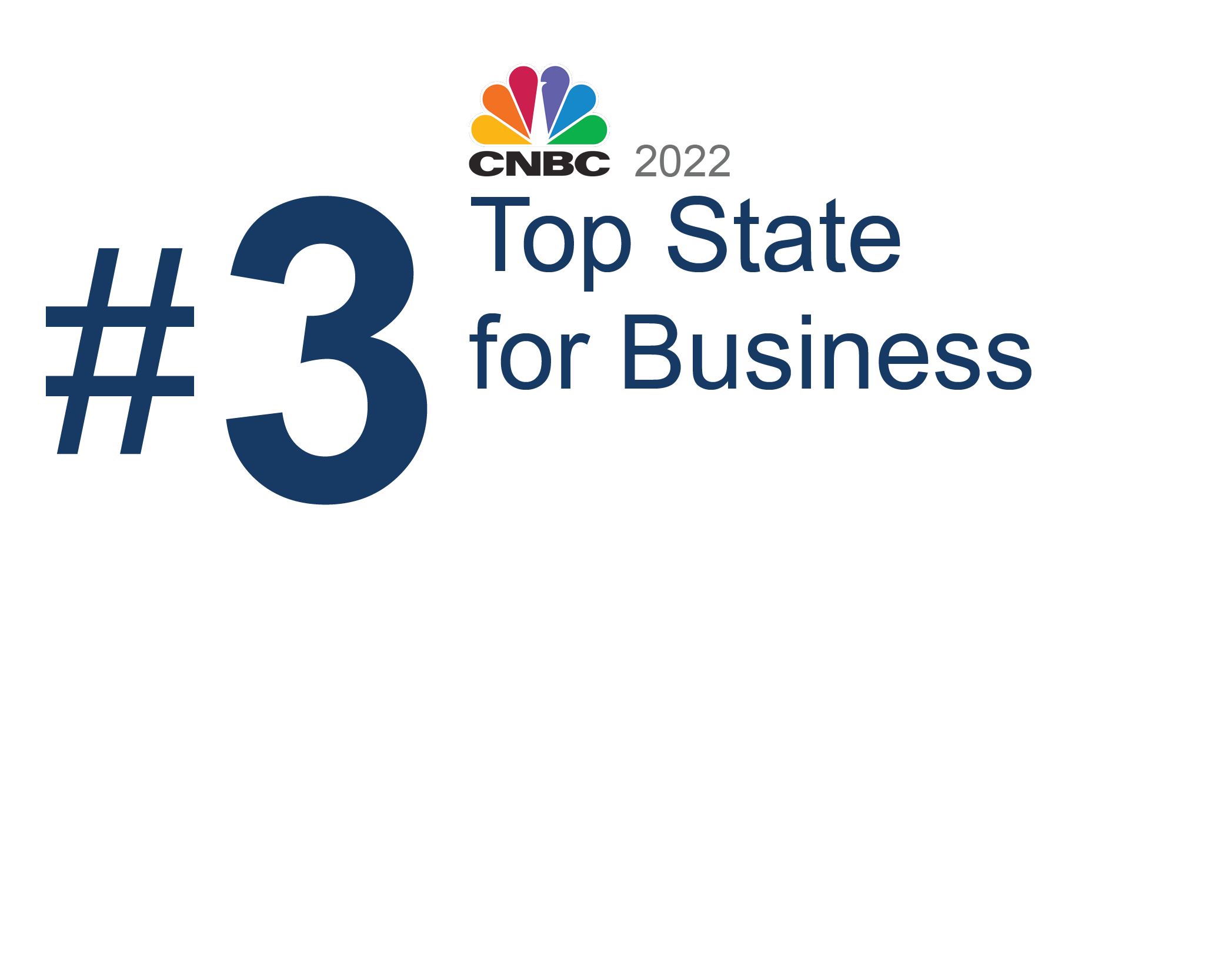 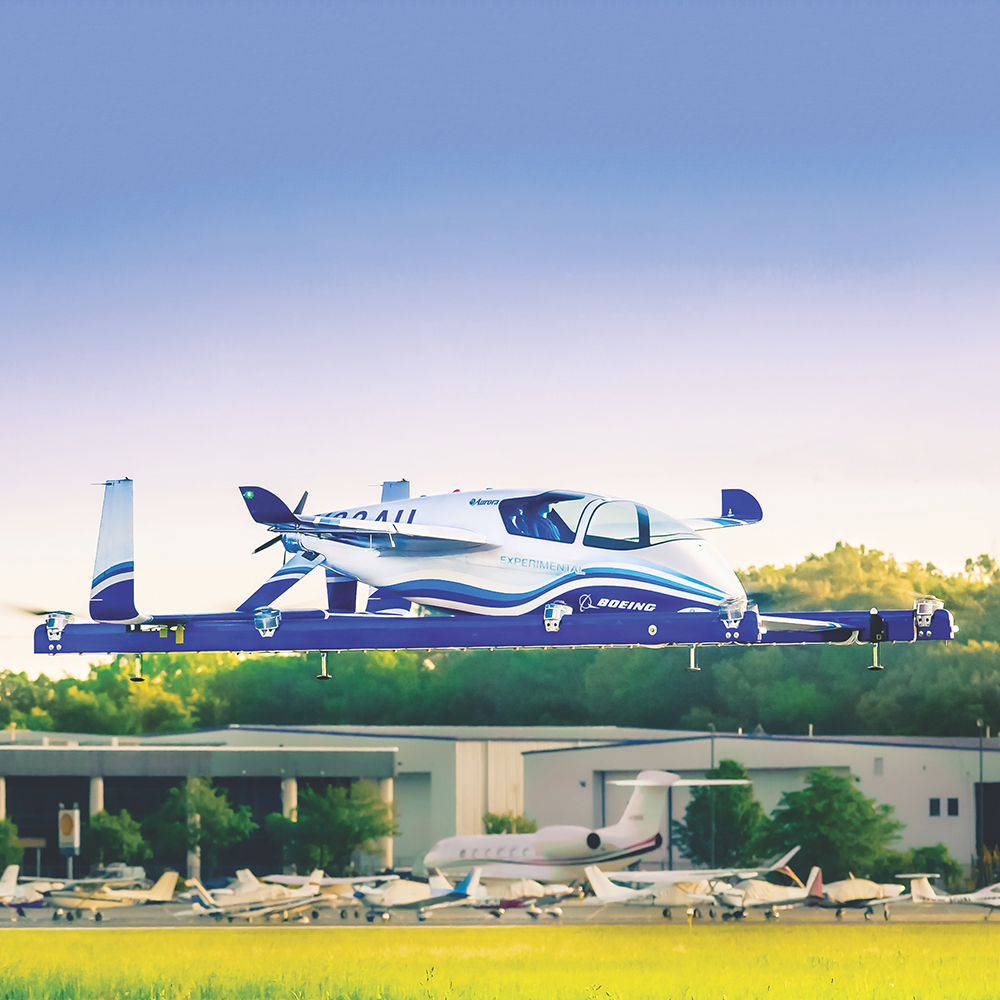 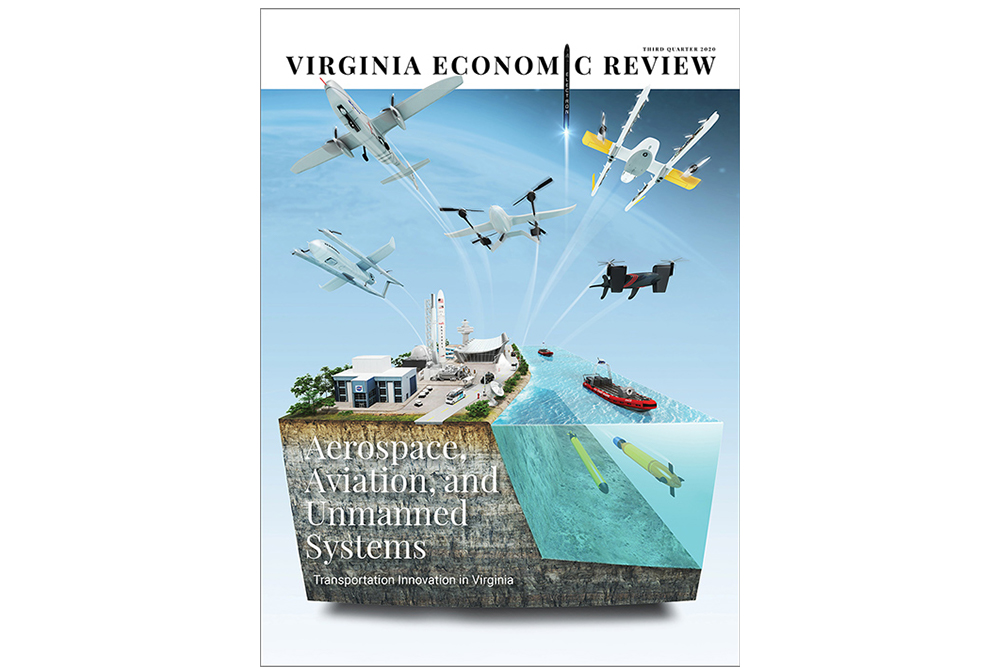 In this issue of Virginia Economic Review, we discuss how advances in aerospace, aviation, and unmanned systems technologies are pushing business in new and exciting directions and how Virginia companies are at the forefront of those shifts. Article highlights include:

Learn More About Aerospace and Unmanned Aerial Systems in Virginia