Headquartered in Newport News, Virginia, Huntington Ingalls Industries (NYSE:HII) is America’s largest military shipbuilding company and a provider of professional services to partners in government and industry. Newport News Shipbuilding (NNS), a division of HII, is the nation’s sole designer, builder, and refueler of nuclear-powered aircraft carriers for the U.S. Navy, and is and one of only two shipyards capable of designing and building nuclear-powered submarines. For more than a century, HII’s Newport News and Ingalls shipbuilding divisions in Virginia and Mississippi have built more ships in more ship classes than any other U.S. naval shipbuilder.

Founded as the Chesapeake Dry Dock and Construction Company in 1886, Newport News Shipbuilding’s history as the builder of the most complex ships in the world goes back 134 years in the Commonwealth. NNS employs over 25,000 Virginians, making it the largest industrial employer in the Commonwealth and the largest shipbuilding company in the United States, with approximately $4 billion in revenues.

As the exclusive provider of refueling services for nuclear-powered aircraft carriers at the forefront of new ship technologies, specialized manufacturing capabilities, and nuclear facility management and remediation, HII relies on the Hampton Roads region’s world-class port facilities, major military commands, and diverse real estate to accommodate its long-term management and facility needs. In 2016, the Virginia General Assembly approved the Advanced Shipbuilding Production Facility Grant Program, making available up to $46 million in capital funds to Newport News Shipbuilding to help the company upgrade its foundry and invest in facilities necessary to build Columbia-class submarines.

NNS was awarded a contract in 2018 to build significant components for the new Columbia-class submarines along with its existing product lines, including the construction of Virginia-class submarines, the refueling and complex overhaul and defueling of the Nimitz-class aircraft carriers, and the construction of Ford-class aircraft carriers. A portfolio of this magnitude required a major increase in hiring and an innovative approach to meet the challenge.

Virginia’s pro-business climate, infrastructure, and talent pipeline have contributed to Huntington Ingalls’ growth in the Commonwealth for more than 100 years. When the company made the decision to evolve its business model and technology to include unmanned systems, Virginia remained in lockstep. 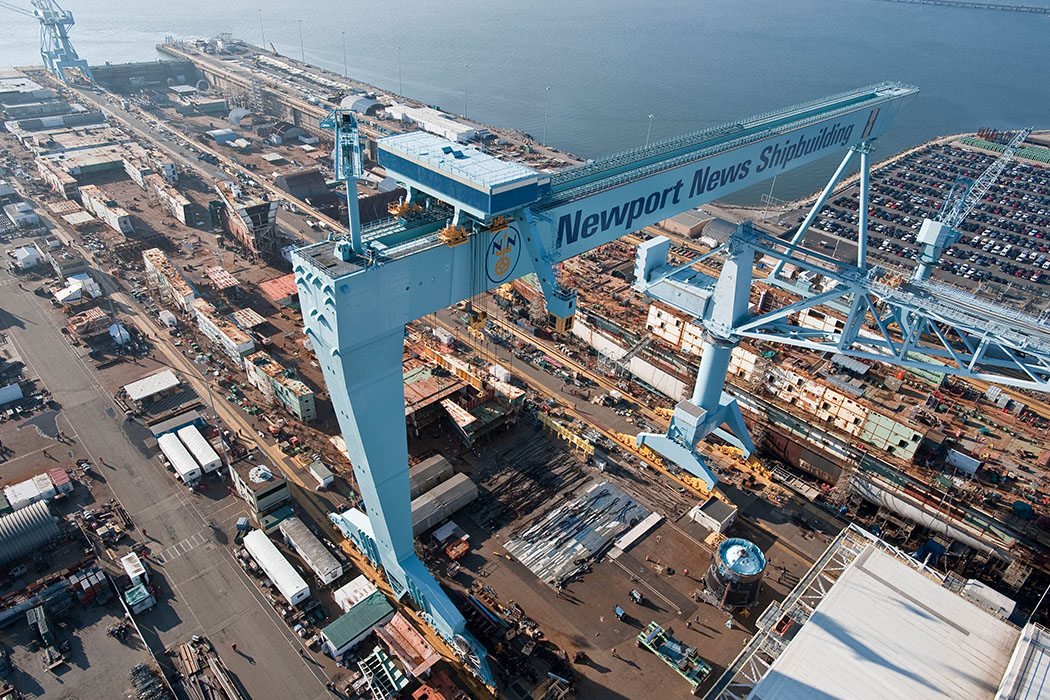 Spanning more than 550 acres, Huntington Ingalls’ Newport News shipyard includes manufacturing facilities, dry docks, and piers. The Apprentice School at Newport News Shipbuilding offers four- to eight-year, tuition-free apprenticeships in 19 trades and nine optional advanced programs. Through partnerships with nearby Thomas Nelson Community College, Tidewater Community College, and Old Dominion University, The Apprentice School’s academic program provides the opportunity to earn associate’s degrees in business administration, engineering, and engineering technology, and bachelor’s degrees in mechanical or electrical engineering. The Apprentice School was approved by the State Council of Higher Education for Virginia to operate as a postsecondary institution in 2020. This certification gives the School the authority to grant academic degrees on its own, further enhancing its national reputation as the model apprenticeship program and reinforcing the company’s commitment to workforce development.

As a longstanding Virginia business, many of the shipbuilders employed at the Newport News campus are third-and fourth-generation shipbuilders. For more than 100 years, Newport News Shipbuilding has served our nation in peace and war, in times of adversity, and in times of abundance. Ensuring the company’s legacy of “Always Good Ships,” this generational workforce has designed, constructed, overhauled, and repaired more than 800 ships for the U.S. Navy and commercial customers.

Hampton Roads is a magnet for quality talent, and thousands of service members exit the military and enter the civilian workforce each year. There are approximately 30,000 students enrolled in career technical education programs in the region in the areas of manufacturing, STEM, and construction trades that help prepare students for careers with companies like Newport News Shipbuilding. Workforce development is at the core of HII’s operating philosophy, and the company invests more than $110 million a year in workforce development, education, and training initiatives, from its apprentice schools at the Newport News and Ingalls Shipbuilding divisions to academic partnerships with colleges and universities, to STEM investments in K-12 education.

In 2018, Huntington Ingalls Industries’ Newport News Shipbuilding division began one of the largest hiring initiatives in its history. Through a partnership with the Commonwealth of Virginia, NNS announced a plan to hire approximately 7,000 people, including the creation of 2,000 new jobs, over a five-year period to support the building of Columbia-class submarines.

In addition to this significant hiring initiative, NNS is also retraining employees over five years to incorporate new digital shipbuilding technology and is making nearly $1 billion in capital investments in the company’s facilities and technology infrastructure.

We are very excited to build this state-of-the-art facility and believe this added capability will truly enhance our ability to perform current and future work, and allow us to remain on the forefront of advanced manufacturing technology. We are appreciative of the great partnerships we have with the Commonwealth, Governor Northam, and our local officials as we move forward in constructing this new facility.

Full Steam Ahead in the 21st Century

HII is advancing development of unmanned systems to support the increasing needs of current and future customers that defend our national security. As part of this commitment, the company is expanding its Virginia footprint by establishing an Unmanned Systems Center of Excellence in the City of Hampton. The state-of-the-art operation will create 250 new jobs.

The first of two planned buildings on the 20-acre campus will be used to assemble hull structures for Boeing’s Orca Extra Large Unmanned Undersea Vehicle (XLUUV) program for the U.S. Navy. The 22,000-square-foot facility was completed in January 2021. Structural development of the main facility, a 135,000-square-foot building, is scheduled to be complete by the end of 2021. The purpose-built facility will be used for unmanned systems prototyping, production, and testing.

Huntington Ingalls Industries is a national leader in advanced manufacturing, and this additional investment is a powerful testament to Virginia’s talent and business environment and builds on the company’s century-old legacy in the Commonwealth.