The Search for an Advanced Data Center Site

In 2002, Microsoft Corp., one of the largest and most influential companies in the world, selected Fairfax County as the location for its Microsoft Innovation & Technology Conference Center, representing the global tech company’s first facility in Virginia. As demand for cloud and online services started booming in the mid-2000s, Microsoft began exploring a future site for its most state-of-the-art data center. The company initially met with VEDP officials at the AFCOM Data Center World Conference in 2006, and started on-site visits to Virginia in 2008. A robust fiber optic network and access to an extremely reliable, competitively priced electric supply from environmentally responsible generation sources were critical site location factors for Microsoft. A new model of technology companies looking beyond urban IT centers to lower-cost environments was on the rise, and Virginia had a top team working to ensure rural regions of the Commonwealth had the infrastructure in place to compete for the long-term economic benefits of data center projects. 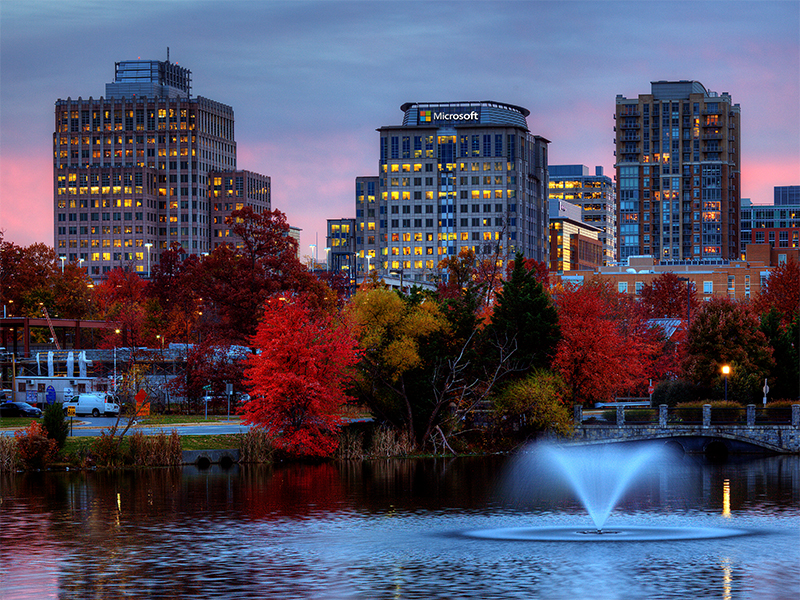 Rural economies in Southern Virginia suffered major losses in furniture manufacturing, textiles, manufacturing, and tobacco production in the late 1990s, forcing regional business leaders to seek a way to stabilize the regional economy. In 2004, the Mid-Atlantic Broadband Cooperative (MBC) was established to solve the rural telecommunications infrastructure challenge. MBC was tasked to design, build, operate, manage, and maintain a state-of-the-art fiber optic network that enabled private-sector telecommunications providers to serve the region, reducing the cost of broadband services by leveling the playing field, expanding the reach of broadband in more rural communities, and creating a competitive economic advantage. To date, MBC has built over 1,900 route miles of fiber in Southern Virginia, providing affordable infrastructure and carrier-class broadband connectivity to drive economic growth.

MBC’s ability to offer high-capacity, diverse fiber routes to major carrier interconnection points in the Eastern U.S. would prove to be a critical component in the project, providing an advanced technology infrastructure in a low-cost operating environment. Dominion Energy was another instrumental partner that could guarantee all of Microsoft’s long-term electric needs would be met. This access and connectivity, combined with the Commonwealth’s data center tax exemptions, economical utility rates, and collaborative state and local partners, ultimately landed Virginia on Microsoft’s short list. VEDP worked closely with Mecklenburg County, the Town of Boydton, and the Virginia Tobacco Region Revitalization Commission, which provides grants to companies locating in Virginia’s former tobacco-producing regions, to present Microsoft a shovel-ready site with the right IT infrastructure and plenty of room to accommodate future growth. The company’s search process was long and competitive, and a strong team of players worked tirelessly to prove that Mecklenburg County was the right fit for Microsoft’s Gen4 data center.

In 2010, Microsoft announced plans to invest up to $499 million to establish its latest generation data center in Mecklenburg County, creating 50 new jobs. The project represented the largest economic investment in Southern Virginia history and a shift to major tech companies locating operations in rural regions.

As demand for cloud and online services continues to grow, Microsoft is investing in Virginia as a strategic location to help us deliver for our customers. Mecklenburg County has been a good home for Microsoft, and we’re committed to supporting the community through local partnerships to help deliver economic, social, and environmental benefits such as expanding access to high-speed broadband services and supporting skills training for positions in the information technology industry.

This was just the beginning: Since its original announcement in 2010, Microsoft has expanded the Mecklenburg operation six times. The company expanded the site in 2011, 2013, 2014, 2015, 2016, and 2019 to serve its rapidly growing customer base, establishing two additional facilities and increasing cloud capacity to keep up with the demand of online usage. The projects represent sustained major investment and a combined total of more than 350 jobs. Microsoft’s corporate presence in Mecklenburg County has expanded access to high-speed broadband services and supported skills training for IT positions, and the company has invested to increase renewable energy access. In May 2018, Microsoft announced the purchase of 315-megawatts of energy from two new solar projects in Virginia, which represented the single largest corporate purchase of solar energy in the United States.

Today, the Commonwealth boasts the largest data center market in the U.S. with more than 700 data processing, hosting, and related establishments employing over 14,600 Virginians. Since 2008, more than $14.8 billion of capital investment has been announced Virginia’s data center industry, which attracts many of the most prominent brands in the tech world. Microsoft’s continued investment in its Mecklenburg County enterprise data center is a powerful success story for Southern Virginia’s visionary planning, world-class IT infrastructure, and skilled workforce.

Nearly 20 years after the company’s first investment in the Commonwealth and with thriving operations in both Northern and Southern Virginia, Microsoft continues to evolve its technology to meet customer needs. As a publicly held corporation with revenues surpassing $125 billion and nearly 156,000 employees worldwide, Microsoft is actively answering the call for increased cloud services, requiring a new operation with strategic access to its customer base and a reliable pool of tech talent.

One of Microsoft’s core principles is actively listening to our customers, so we can build and improve our technology based on their feedback. Being close to our customer base is extremely important to our ongoing collaborations. We’ve had a presence in Reston for many years now, and this expansion will allow Microsoft to deliver even more solutions from a region known for its innovation and passion for technology.

The company again looked to Virginia: In May 2020, Microsoft committed to investing $64 million to establish a state-of-the-art software development and R&D regional hub in Fairfax County. The transformational project, announced during the global pandemic that resulted in unprecedented unemployment, will create 1,500 new jobs. The company will occupy 400,000 square feet in the Reston Town Center for its new location, anticipated to be ready for employees in summer 2021. The plans include a new retail space for engaging directly with customers.

The newest operation in Northern Virginia marks another major milestone in the long-term corporate partnership between Microsoft and the Commonwealth. The company’s expanding footprint is a powerful testament to Virginia’s leading position in the tech industry and the unparalleled infrastructure and talent prevalent in diverse regions of the Commonwealth.

WillowTree’s footprint in Charlottesville is an intentional and strategic choice to locate in smaller and rural areas rather than urban tech centers. The company’s success is a true testament to small Virginia metros’ ability to attract and retain top-tier IT companies. WillowTree began exploring possible corporate headquarters sites that could consolidate its rapidly expanding Virginia team in one location

Hershey currently employs more than 1,000 people in the Commonwealth, with the majority located at its Stuarts Draft manufacturing facility. The plant plays a critical role in the company’s growth and the production and delivery of its products to global consumers, so when Hershey began its site selection process, of course Virginia was in the running.