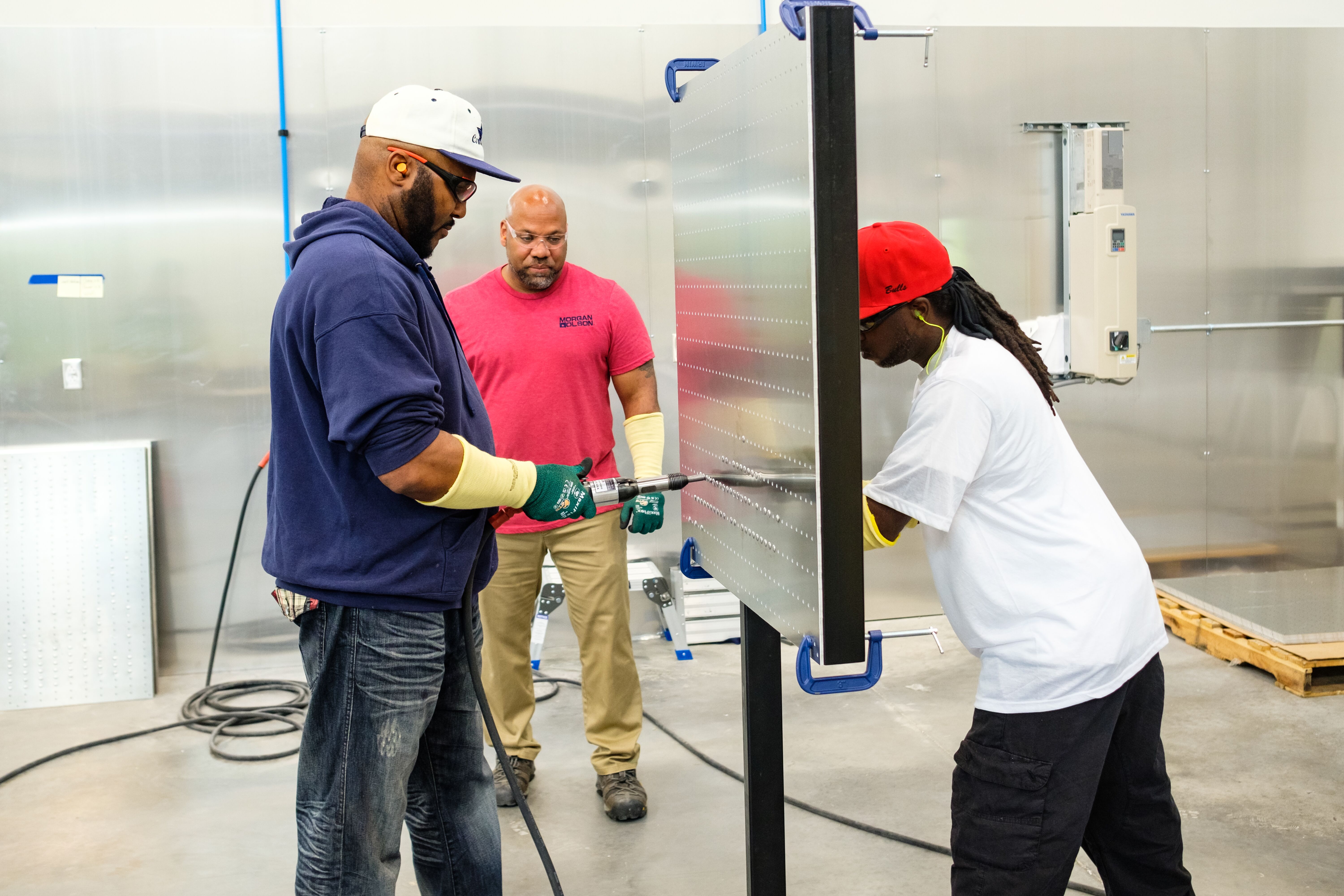 Headquartered in Sturgis, Michigan, Morgan Olson’s legacy of building iconic step vans began in 1946 with the production of the first “all-aluminum” step van. Today, Morgan Olson’s products are used to deliver online purchases to homes and businesses throughout North America. In 2003, Morgan Olson was purchased by J.B. Poindexter & Co., Inc. (JBPCO), a diversified manufacturing company with more than 6,200 employees headquartered in Houston, Texas.

Morgan Olson was seriously considering a location in Virginia, but the specific site under review ultimately did not meet the company’s requirements for a project of this size. Just as Morgan Olson leadership was turning its attention back to the competing states, Virginia officials learned that IKEA planned to shut down its 925,000-square-foot facility in Danville-Pittsylvania County, the company’s only manufacturing site in the U.S.—resulting in an expected loss of approximately 300 jobs. This closure would further devastate a region that was hard hit by the loss of textile manufacturing and has made great strides to rebound economically. A few phone calls were made, and Morgan Olson was flown by state plane to Danville-Pittsylvania County to tour the site. Wheels were put in motion in record time, and the company decided the IKEA plant could be the perfect fit for its expansion.

One of the most attractive aspects of locating in Danville-Pittsylvania County is that we will be able to take advantage of the new Virginia Talent Accelerator Program, which will help us quickly attract and train the high-quality workforce we need to deliver for our customers.

Virginia demonstrated an unprecedented commitment to providing custom support to ensure the company’s long-term success in Virginia. Morgan Olson will receive support from the Virginia Talent Accelerator Program, a world-class workforce initiative created by VEDP in collaboration with the Virginia Community College System, with funding support from the Governor’s administration and the Virginia General Assembly. Launched in 2019, the program accelerates new facility start-ups through the direct delivery of recruitment and training services that are fully customized to a company’s unique products, processes, equipment, standards, and culture. All program services are provided at no cost to qualified new and expanding companies as an incentive for job creation.

The 703 new jobs created through Morgan Olson’s investment will also diversify employment opportunities available to the citizens of Danville-Pittsylvania County. The project is expected to have an additional indirect employment impact of 311 jobs, and will include the development of fabrication supply chain suppliers and infrastructure support, maintenance and repair support, and subcontractors to modify, build, and install equipment needed to convert the plant from furniture manufacturing to heavy-duty truck manufacturing.

Referred to as “a one-in-a-hundred opportunity, a real Hail Mary pass” by Stephen Moret, VEDP’s President and CEO, the deal represents a groundbreaking win for Danville-Pittsylvania County and the Commonwealth, and was a collaborative effort that included many state, local, and regional partners. With this major project, Morgan Olson ensured the soon-to-be vacant IKEA plant would remain in productive use while substantially increasing the number of employees at the operation, becoming the largest private employer in Pittsylvania County. Icing on the cake: former IKEA employees would receive priority consideration as part of the company’s hiring process.

Morgan Olson’s capital investment and new jobs will come in two phases, the first beginning with the purchase of necessary equipment — involving roughly $40 million in investment — and 300 jobs to move the operation forward.

The company began interviewing former IKEA employees for professional staff positions in November 2019. Around the same time, a team of expert instructional designers from the Virginia Talent Accelerator Program and Danville Community College traveled to Morgan Olson’s plant in Loudon, Tennessee, to gain an understanding of the processes, best practices, and training needs for the new Virginia operation. The team returned in early 2020 to gather more detailed information and capture video footage of workers performing assembly tasks. This film will be utilized in process training classes that provide new hires with a clear understanding of the sequence, purpose, tools, materials, components, hazards, and quality considerations in each step of the company’s manufacturing process. Trainees also learn Morgan Olson’s unique process terminology.

Following a job fair for former IKEA employees and a second job fair that was open to the public, the Virginia Talent Accelerator Program team conducted two weeks of pre-hire training, introducing job candidates to riveting, measuring, and assembly procedures. This training provided applicants with a preview of their future work while enabling Morgan Olson to survey each candidate’s performance — a unique opportunity to gauge job fit before employment commitments are made.

Post-hire training classes began in mid-March as part of a comprehensive program in safety, quality, communication skills, and Lean production, along with extensive hands-on instruction in riveting and assembly. To lay the foundation for its collaborative culture, Morgan Olson executives  requested extensive leadership training. In response, the Virginia Talent Accelerator Program team developed an immersive four-week  program tackling topics such as emotional intelligence, A3 thinking, conflict resolution, and managing across generations. To date, the program has been delivered to three classes of team leads and supervisors, with training for the management team beginning in July 2020.  The company is so proud of it, they have dubbed it, The Morgan Olson Leadership Academy. Production at the Danville-Pittsylvania County plant began in early June 2020, with plans to be at full production by July 2022.

Securing a project of this magnitude brings far-reaching benefits. Morgan Olson has demonstrated a commitment to longevity in Virginia — in addition to the 925,000-square-foot plant, the company also purchased more than 100 acres of surrounding property for future growth and development.

Southern Virginia boasts a rich legacy of manufacturing and offers world-class training institutions that are partnering with the company to create specific programs to prepare its new workforce. Morgan Olson’s investment will further bolster this 21st-century industry sector in the region and the Commonwealth for many years to come.