The Sky’s the Limit

The company unveiled its Neutron rocket in March 2021, which will be capable of delivering a 17,600 lb. payload to low Earth orbit in a reusable configuration and is expected to be operational in 2024. The search soon began for a new rocket production, assembly, and integration facility, as well as a dedicated launch pad for the Neutron rocket.

Neutron is a new generation of rocket that will advance the way space is accessed, and Virginia makes perfect sense as Neutron’s home base. Its position on the eastern seaboard is the ideal location to support both Neutron’s frequent launch cadence and the rocket’s return-to-Earth capability of landing back at its launch site after lift-off; and as one of only four states in the United States with an FAA spaceport license for missions to Earth orbit or on interplanetary trajectories, Virginia is home to an active and experienced aerospace workforce we can pull from to support Neutron’s development and launch. I’m thankful for the Commonwealth’s enthusiasm and backing of Neutron which, combined with the state’s rich heritage as an aerospace state, made it difficult to see anywhere else but Virginia as Neutron’s future home.

Virginia offered a strong value proposition: a prime position on the eastern seaboard, a thriving industrial and innovation ecosystem, a top-ranked business climate, and a highly skilled aerospace and unmanned systems workforce. In addition, the Mid-Atlantic Regional Spaceport (MARS) on Virginia’s Eastern Shore is one of only five sites in the U.S. with an FAA spaceport license for missions to Earth orbit or on interplanetary trajectories and offers full-service commercial launch and drone testing facilities. Virginia was in the running with Florida and Texas—well-known powerhouses in the aerospace industry—and would ultimately prove itself to be the optimal location for an industry leader of Rocket Lab’s caliber.

An Out-of-this-World Legacy in Aerospace

Home to NASA Wallops Flight Facility, one of the oldest launch sites in the world, the Eastern Shore of Virginia has a rich history as an aerospace hub with a strong industry ecosystem. The Mid-Atlantic Regional Spaceport, located within the NASA Wallops Flight Facility, provides full-service launch facilities and offers a significant competitive advantage for commercial, government, scientific, and academic users both foreign and domestic. MARS is approved for launch azimuths from 90 to 160 degrees, making it an ideal location from which to launch to the International Space Station (ISS). Northrop Grumman’s Antares rocket launches from MARS to resupply services missions for NASA, delivering science investigations, supplies, and equipment to ISS. The Wallops Research Park offers 200+ acres specifically for Unmanned Aircraft Systems and medium-class space launch vehicles, particularly those seeking to leverage and enhance the capabilities of MARS and NASA Wallops Flight Facility. The advantageous geography of Wallops Island, renowned research sites, and proximity to the federal government are major reasons for the region’s success attracting aerospace investment, and companies can benefit from an active and experienced aerospace workforce that provides a long-term talent pipeline.

In December 2019, Rocket Lab officially opened Launch Complex 2 at MARS on Wallops Island as the company’s first launch site in the United States. It was built specifically for the Electron rocket and represents Rocket Lab’s first planned mission from U.S. soil and a new national launch capability for the United States. The Launch Complex 2 project armed Rocket Lab with first-hand knowledge of the region’s advantages and Wallops Island’s unique capability to support both Neutron’s frequent launch cadence and the rocket’s return-to-Earth landing back at its launch site after liftoff. 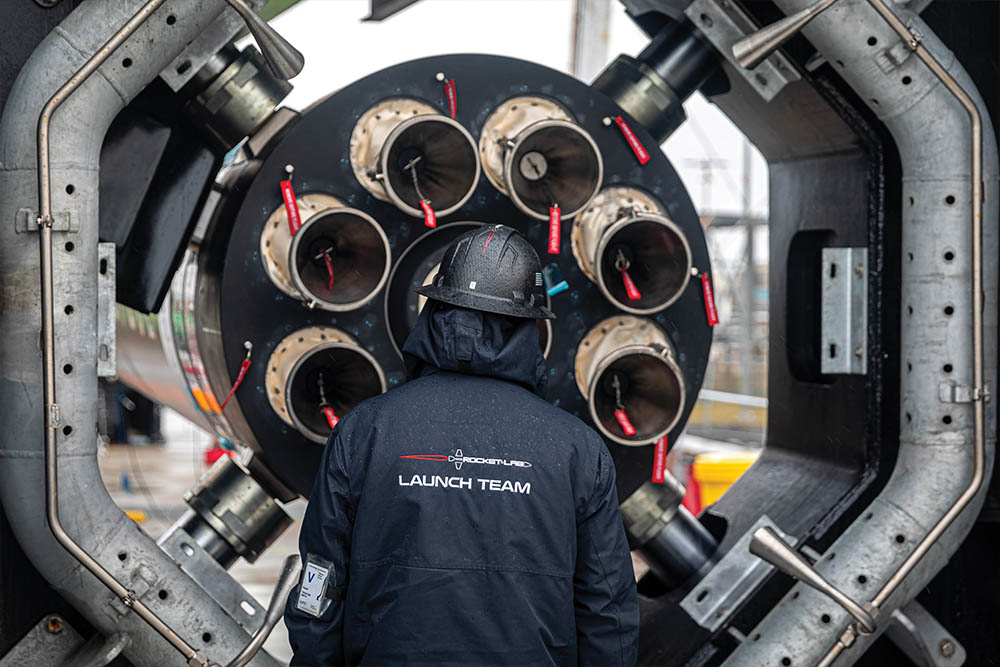 The Eastern Shore of Virginia’s proven record of success in the aerospace industry and the skilled workforce and infrastructure in place gave Rocket Lab confidence that its new operation could thrive in Virginia. In February 2022, Rocket Lab announced Wallops Island as the location for its launch site and extensive manufacturing and operations facilities for the Neutron rocket.

Rocket Lab will launch the Neutron from a new Virginia Commercial Space Flight Authority-owned launch pad that will be located within the NASA Wallops Flight Facility and Mid-Atlantic Regional Spaceport and close to Launch Complex 2. The 250,000-square-foot state-of-the-art complex will be constructed on a 28-acre site adjacent to the Wallops Island Flight Facility and will include a Launch Control Center, Rocket Lab’s fifth global operations center for launch activities and on-orbit operations.

To support rapid production of the Neutron rocket, current plans for the complex include automated fiber placement robotic production systems capable of laying up meters of Neutron’s new, specially formulated carbon composite structures in minutes. As a reusable rocket, Neutron is designed to land back on the Launch Complex 3 pad after a mission and from there it would be returned to the production complex for refurbishment and re-flight. Up to 250 engineers, technicians, and support staff will be stationed at the complex.

Virginia is on a mission to lead the aerospace industry in the United States. From ground to sky and beyond, the Commonwealth guarantees prime infrastructure, a robust talent pipeline, a highly innovative and collaborative ecosystem, and comprehensive industry expertise within Virginia’s educational institutions and research centers.