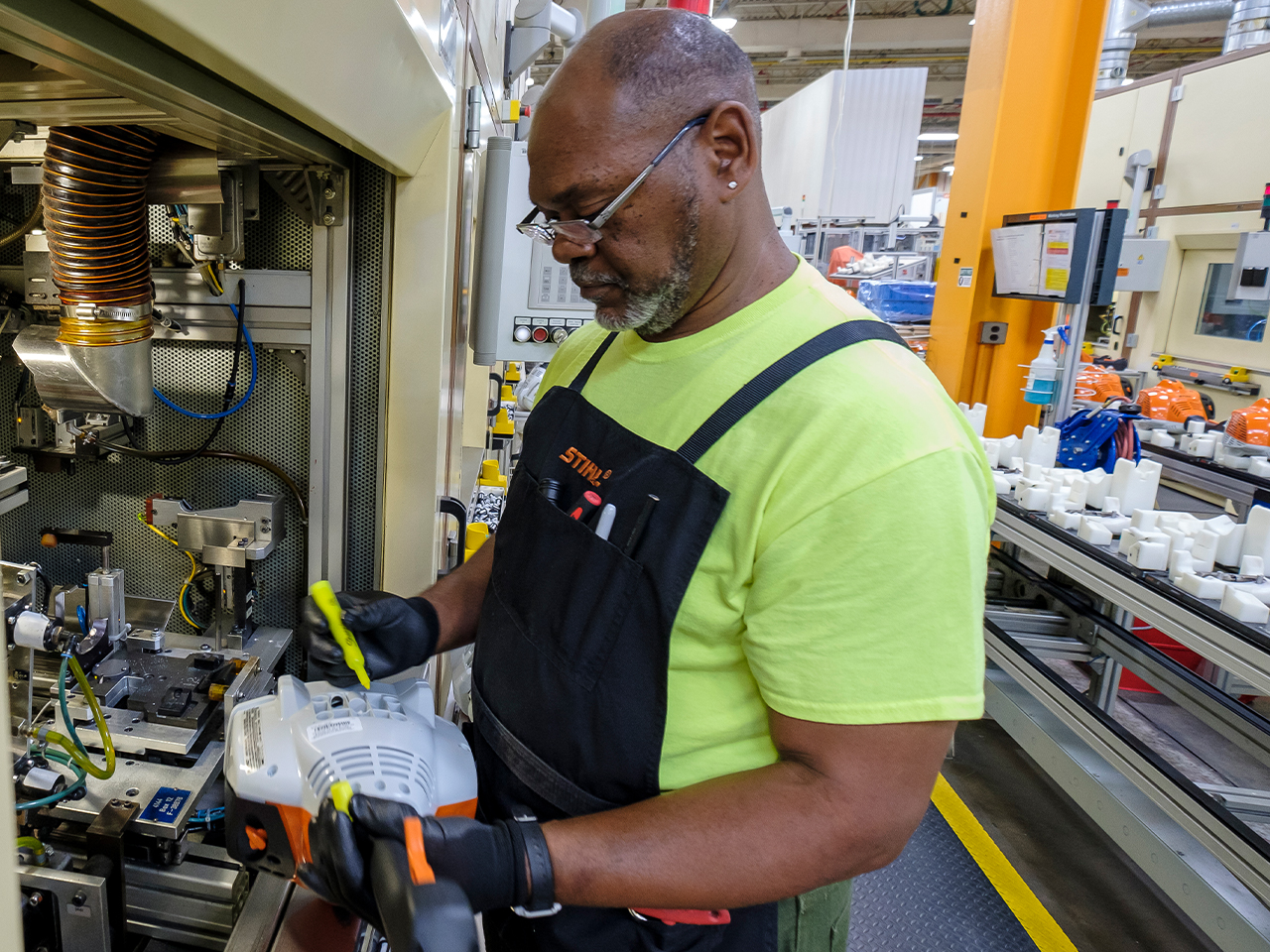 No Stranger to No. 1

STIHL Inc., the Virginia-based headquarters for U.S. operations of the worldwide STIHL Group, manufactures the No.1 selling brand of gasoline-powered handheld outdoor power equipment in America, as well as the No.1 selling brand of chainsaws in the world. Notably, the company’s products are sold solely through authorized local STIHL Dealers from coast to coast — not big box stores. STIHL Inc. exports to more than 80 countries around the world, and the majority of STIHL products sold in America are also built in America: in Virginia.

Germany-based STIHL Group was founded in 1926, and by 1971 produced the world’s best-selling chainsaw brand. Recognizing the U.S. market as one of the largest in the world, the Stihl family decided to open a manufacturing facility in Virginia Beach, Virginia, in 1974. For over 45 years, STIHL has been an invaluable corporate partner in the Commonwealth. Decades of success have resulted in global and domestic competition for the company’s many expansions, but the Commonwealth and the City of Virginia Beach continue to provide STIHL with the most fertile environment for growth.

Finding a site with access to a major port was a critical factor in STIHL’s selection process, and Virginia Beach’s proximity to one of the country’s largest deepwater ports made it an ideal U.S. location, allowing the international manufacturer strategic access to the global marketplace. As the only East Coast port with authorization for 55-foot channels, The Port of Virginia boasts deep shipping channels, no height restrictions, and double-stack rail service with two Class 1 railroads.

Virginia’s highway system represents the nation’s third-largest state-maintained transportation network, comprising more than 70,000 miles of primary and secondary roads and six major north-south and east-west interstate routes. A majority of the products produced at STIHL’s Virginia plant are sent to 11 branches and distributors across the U.S. that, in turn, sell the products to more than 10,000 authorized local STIHL Dealers across the country. Virginia continues to invest in its integrated transportation system of highways, railroads, airports, and seaports to provide logistical advantages for companies in every industry.

In 1974, STIHL Inc. began assembling one model of chainsaw in a rented 20,000-square-foot facility in Virginia Beach with 50 employees. The manufacturing area was expanded in 1983 and again in 1990. In 1996, STIHL continued its growth with the opening of a new 50,000-square-foot storage facility to house finished goods for worldwide distribution. In 2003, the company announced a 228,000-square-foot addition, followed by another $78.4 million expansion in 2005.

In 2019, STIHL completed a $30 million expansion of its U.S. headquarters operation, constructing a state-of-the-art 80,000-square-foot administration facility to combine the finance and controlling, sales and marketing, legal, and customer and technical service teams under one roof, as well as the addition of a new museum and brand experience center.

The quality of a workforce reflects the quality of a company, and STIHL is committed to excellence in its products, people, and dealers. As the headquarters for STIHL Group’s entire U.S. operations, the Virginia Beach facility depends on a strong, consistent pipeline of employees with diverse specialties.

Virginia prides itself on offering the No.1 workforce in the country (CNBC, America’s Top States for Business, 2019), including a robust working veteran population. Each year, thousands exit the military and enter the civilian workforce in Virginia, providing a steady stream of dedicated talent to a variety of industries. The Commonwealth is known for its world-class post-secondary education system that consists of more than 45 local and regional universities and 23 public community colleges with 40 campuses around the state. Ranked the No. 1 Top State for Higher Education (SmartAsset, 2021), Virginia has continuously provided STIHL with a premier labor pool that can effectively fill all machining, product assembly, molding, engineering, sales and marketing, and finance positions.

Virginia is home to all facets of the manufacturing industry, and securing STIHL’s U.S. headquarters and manufacturing operation more than four decades ago continues to bring far-reaching benefits. STIHL repeatedly demonstrates a commitment to longevity in the Commonwealth with forward thought, expansion, and job creation. Virginia is proud to be the home of STIHL’s largest manufacturing location worldwide, and looks forward to supporting the company’s growth for the next 45 years.

The City of Virginia Beach has been an ideal business partner. For over 45 years, the city has continued to create a positive economic environment for manufacturers like STIHL, supporting our continued growth and expansion.